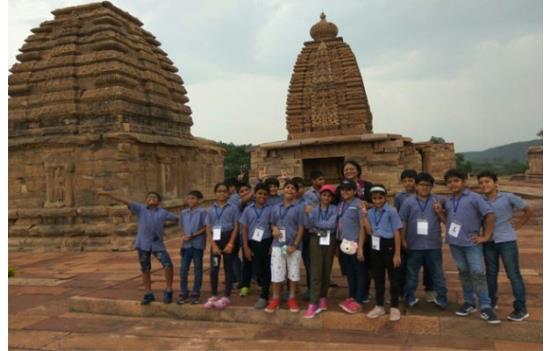 About thirty six students of P-4 accompanied by two teachers, went on a trip to Hampi and Badami from 23rd to 26th September. The purpose of the trip was to familiarize the children with India’s rich cultural heritage and introduce to them the need to preserve and protect our monuments.

In Hampi they saw the remnants of the mighty Vijaynagara Empire which existed between 400 to 600 years ago. It is a matter of pride that these sites were chosen by UNESCO as a World Heritage Site. The chidren visited the Vijaya Vithala Temple and the Virupaksha Temple and also the areas that formed the royal enclosure of the Vijayanagara kings. After Hampi, they were taken to Badami where they visited the caves built by the Chalukyan kings who ruled 1400 to 800 years ago. They were also taken to Pattadakal which was a coronation area for the Chalukyan rulers and is again UNESCO World Heritage Site. The beautiful sculptures and architecture enthralled the children and they came back well informed.